Last week Virgin Media experienced some packet loss on their network, which in turn impacted my surfing experience for a number of hours. After running through some diagnostics on my own devices to confirm the issue was indeed down to Virgin, it occurred to me that it may be a good time to document my network. It’s been something I have been meaning to do for a while, and you know, just not had chance to do it. So here goes…

The first step is to produce a network diagram, using Visio. Network diagrams are a valuable resource to the IT professional, quite often it’s the starting point when diagnosing network problems, and alongside that, being able to effectively use tools such as Visio to produce an accurate network diagram is an essential skill.

Below is a Visio diagram of my home network 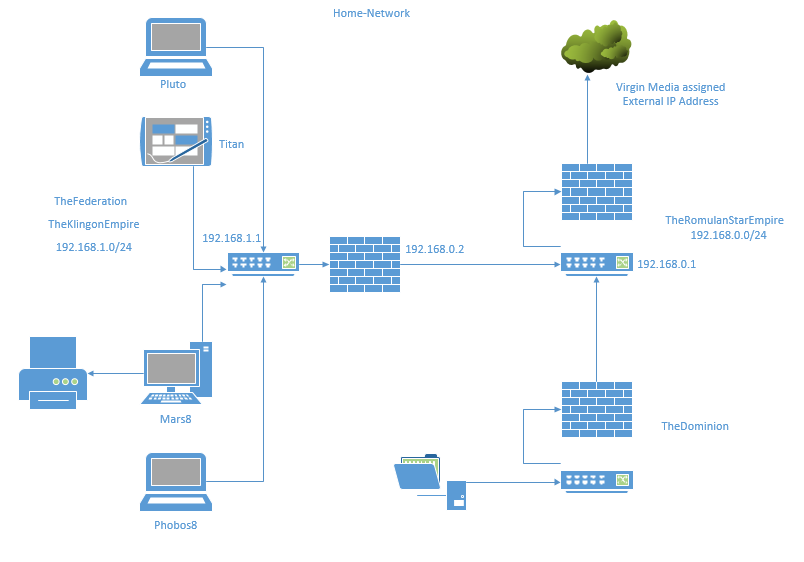 Both wireless networks (TheFederation & TheKlingonEmpire) are configured and enabled, assigning IP addressed in the 192.168.1.0/24 range.

Belkin Wireless Cable Router – Hosts TheDominion wireless network, connects home server to the network. The home server is going to be a network storage location, the Dell 1850 has mirrored drives so gives be some redundancy. Currently I’m still working on this part of the network.

There are numerous other devices like phones, iPads, kindles which connect to the wireless networks, normally I recommend the user of those connect to TheFederation.

So that’s the basic layout of my home network, quite simple and easy to maintain, I very rarely have any issues and when I do its normally Virgin Media.