In this, the first post covering content from the 70-411 Administering Windows Server 2012 exam, I’m going to look at deploying & managing server images using Windows Deployment Services (WDS). WDS can be used to automate the deployment of standard or custom images to servers, which can dramatically speed up deployment if you have a significant number to install.

WDS can be installed as a role on a Active Directory Domain Services (ADDS) connected or standalone server. The minimum prerequisites for installing WDS are

Install WDS as a role on the target server via Server Manager. You will automatically be prompted to install the necessary management tools It can be deployed with the combined Deployment Server role and Transport Server role service, shown below or with just the transport server only (less common). 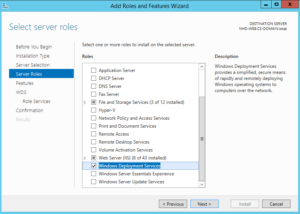 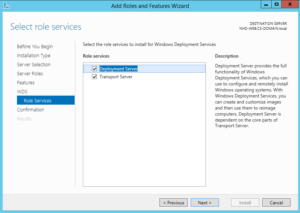 2. Location of the Remote Installation Folder – Must be on a NTFS formatted volume with enough space to hold the server images, driver packages and applications.

3. Initial PXE server settings – Control which clients can download images. None, only presaged clients or any PXE client that requests an image

Boot Images – Windows PE images that reside in the \sources folder on the windows installation media as \sources\boot.wim.

Install Images – Actual operating system images that are deployed to the client computer. The default images is located in the \sources folder as \sources\install.wim. Create custom images using a capture image.

Discover Images – Used by client computers that do not support PXE boot. Need Boot.wim file and tools from the Windows ADK for Windows 8.1

You can copy, disable, enable, import, export, remove and set the properties of images within a WDS image store by using the GUI or PowerShell.

Use the Add Image Wizard in the WDS console or the Import-WDS* cmdlets in PowerShell to add images to the image store.

WDS organizes install images into an image group to enable them to share common file resources and security, you must create at least one image group.

Use a capture image to create an updated install image that includes current hot fixes and updates, or use DISM commands and PowerShell to mount an offline image and update it directly.

You can directly modify an offline image (.wim) or virtual hard disk (vhd or vhdx) with the DISM cmdlets.

To modify an image or VHD by inserting an update into it, follow these steps

It’s possible to modify the current running image using the –online parameter, or modify an offline image or VHD by mounting it and modifying the mounted image.

When substantial changes are required, or there is a change to the underlying hardware it’s often better to create a new template computer and then capture an image from it.

WDS allows you to add hardware specific drivers to your deployment images, and allow images to request a specific set of drivers from the available driver store.

You can create driver groups to host and organise collections of drivers, the default driver group is called “DriverGroup1”

The following cmdlets are available

For a full list of WDS PowerShell cmdlets visit

So that concludes WDS, it well worth working through a few demos as preparation for the exam, and know the PowerShell version of the commands.