January – January was a steady month with three posts published. The first, a review of 2015, looking back at some of the highlights and revisiting some of my favourite posts of the year. If you wish to take a look back at 2015 and what I got up to, the report can be found here.

In the other posts two posts this month,  I took a look at my first ever wearable device, the Microsoft Band 2. I also set out my goals for 2016, personal and targets for the site. This post can be found here.

February – Two posts published this month, the first, a Tech Note detailing an issue I came up against on a production HP file server. When launching the HP Management tools, the application reported “No Items.” Obviously not a great place to be!

Next was another of my 70-412 study notes, this time looking at storage. Page views were down this month, as were followers.

March –Three posts in March, the first, a routine maintenance procedure on a Dell R710 server, and the next two taking a look at Windows 10 Mobile via the Microsoft Lumia 650 and 930. Page views were up from February, and I gained 4 new twitter followers, nice.

Also this month I previewed my visit to Leeds in early May, where I attended a Microsoft event. Page views are up very slightly, and I gained 3 new twitter followers.

May – Two blog posts this time, both for the “Building a Test Lab” series. This is something I am planning on returning to later in the year. However early May was dominated by my trip to Leeds for the Microsoft event, “What’s new in Hybrid IT Infrastructure.” This was a superb day of free training from two of Microsoft’s technical experts. To read about my day click here.

Page views were the highest so far in 2016, and I gained 6 new twitter followers.

Page views and twitter followers down from last month.

July – Holidays, I love them. Two posts this month from the Tech on Holiday series which I have been running since the start of TechSupportPro.

Page views slightly down, twitter followers up from last month.

August – Back in full work mode this month, hence the single post reporting on a site visit to a data centre in London. The task was to replace a failed HDD in an old server which unfortunately did not support hot swap drives. To read about my adventures on the road, click here.

Page views and followers down on last month.

Page views down, but twitter followers up to a high of 34.

October – More study notes from the 70-412 track, this time looking at recovering servers when disaster strikes. This was the only post in October due to illness and personal commitments.

Page views up, the highest level since May, added four new twitter followers.

November – No posts this month, my main focus was studying for the CompTIA Network+ exam, scheduled for the 27th. This month recorded the highest number of page views for the year, partly due to some retweets from @TechTrainerTim & @Bagurdes ref their Network+ course on Pluralsight. 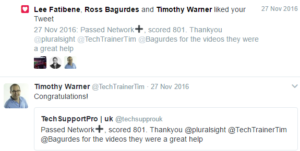 December – No posts in December, marked a quiet end to the year. Good number of page views, and twitter followers reached a new high.

So there is my take on 2016, quite busy and definitely some real high. I would say passing the CompTIA Network+ certification was a personal high and one of my goals for the year, which along with the free day of Microsoft training in Leeds during May was fantastic.

As always, thanks for reading